You Can Trust God 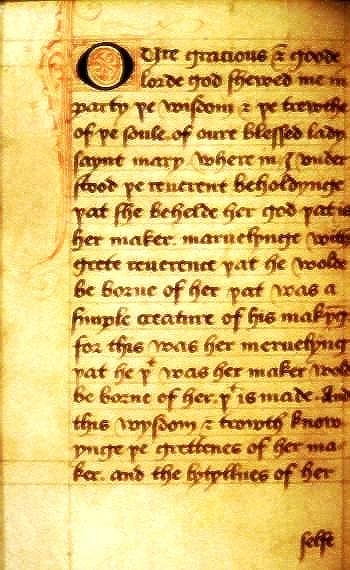 We have just heard a reading from Julian of Norwich, one of the great mystical figures of world religion. It is unfortunate that most people do not know that Christianity's mystical tradition is as strong as anything you will find elsewhere, reaching right back to the beginning of the Christian faith. You don't have to go to an ashram in India if you seek enlightenment. There are a few reasons why this has occurred, among them is the compensatory prejudice against Christianity n some sections of our culture, a reaction against the dominance and contribution of Christianity to the Western world. The second is the media dominance of the kind of traditions that know very little about the mystical traditions of the church.

Julian had a vision of everything that is, including stars and planets etc, as the size of a small nut. It appeared so fragile. How could it even continue to survive? Because God loves it. God sustains it, and everything that is will only find its true and final completion and rest when it rests in God. I'll come back to this.

But I want to talk about a great way to get on with people, and to move through difficult situations. It is called the 'win-win'. I get what I want, you get what you want, and we can get on with our business, whatever it is. It is great, and it really works. Much better than 'win-lose'. But there is a difficulty with it. 'Win-win' is based on self-interest. It is still selfish, in the nicest possible way. The problem is that, if either of the partners in the 'win-win' no longer perceive it to be in their interest to remain in the relationship, they can unilaterally change it. To the possible detriment of the other person.

God isn't like this. Go back to my last sermon at chapel. I talked about that strange vision that Moses had of the burning bush. But the strangest thing was the name of God: 'I AM'. Strangely incomplete, and this is because God is already complete. God is already full, complete, in no need of us or anyone or anything else. This is stretching our theological imaginations because everything we encounter on this plane of existence is in some way incomplete without the rest of us. But God is complete. God does not need us.

This is why Julian of Norwich could say that everything that is will find its final rest and completion in God, for only God will give everything entirely for us.
Posted by Warren Huffa