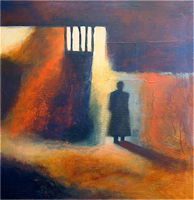 My hermeneutical key to reading Scripture is the regula fidei as expressed in the Creeds, and generally the four key doctrines of Trinity, Incarnation, transcendence and grace. Is this another set of preconceptions that need to be put aside like the conservative preconception of inerrancy and the liberals' expressivism? (See previous post here.) I don't think so, and for two reasons.

First, inerrancy and expressivism seem to me to be alien to the Scriptures, plucked from another set of agendas. From the beginning the regula fidei is internal to the church, always present and developing, and used as the hermeneutical key, in the debates that raged in the patristic period. It is this rule of faith that internal to the church's reading of Scripture from the beginning, and its refinement parallels the formation of the Creeds and the canon of Scripture.

Second, I came to this position after being converted from a diametrically opposed position, indeed the outright rejection of the doctrines of Trinity and Incarnation. What converted me was the way in which these doctrines opened up the Scriptures from the inside, and brought back together what some modern biblical scholarship tears apart. But the rule of faith does this from the inside. Inerrancy is an alien principle that is believed and applied before Scripture is read (or eisegeted into Scripture itself), and expressivism's source of truth lies outside Scripture. The Trinity and Incarnation (and grace and transcendence) are internal readings. Give it a go; read the Scripture from the point of veiw of these four key doctrines. You will find that you replicate the debates of the early church that resulted in these creedal type beliefs, and come to the same kind of splits that the early church came to. Are you willing to affirm your humanity, as it is? Or do you try to split your humanity from God ever so subtly? How comfortable are you with a God who forgives so generously? And how do you feel about God's unity with a corpse? God dead in the flesh? Ask these questions, apply the doctrines, and read Scripture.
Posted by Warren Huffa