The Cross and Reconciliation 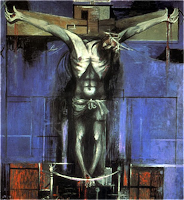 It is rather a great surprise to me that while so many Christians look to the Cross as the source of forgiveness and reconciliation, they do so without any real formed thought as to how it all works. While some may feel this to be unimportant, the reality is quite different. For far too long, the populist view of the Atonement is that Jesus did something for us that we are unable to do for ourselves. Whilst that is partly so, there is also the element in the whole Faith that Jesus also shows us the way to work towards reconciliation, and that we as Christians should be agents of reconciliation ourselves.

To get a clearer picture, it may well be useful to understand something of how and why the Judaic-Christian Faiths came into existence. All religions and isms, of whatever sort are attempts to understand what it means to be human and alive on Planet Earth. Whilst this human process may well have begun in an atmosphere of fear and ignorance, our Faith – amongst others - has moved a long way from that position. From the earliest time from Abraham on, this search has persisted, and the process needs to continue as well. Those ancient creation stories, do you see, whilst not as early in the Biblical tradition as sometimes perceived, are hugely significant even now as they are part of that hugely significant search. They are not to be understood literally, for they are myths (i.e. a story meant to be understood, not literally but with imagination; true, but not historically true. For instance the Flood narrative is not history, but may well be based on an actual event) - from which the reader (or listener in millennia past) was expected to draw the lessons.

This all means that the faith once delivered is offered as a (the!) answer to why human life and relationships seem to marred and damaged, and what are their goals and possibilities anyhow. Far from irrelevant to modern life, here lie the sorts of answers that everyone is searching for, but sadly few manage to find. That sadness lies, not in the inadequacy of the Biblical faith, but in other issues.

Quite a lot of misunderstanding revolves around the Cross. Whilst many Christians see this action as the means of forgiveness and reconciliation, (accomplished with no effort from us) there is rather more to the Cross than just that. May I tell a story first and then ask you to see how things fit together. All this is simply to uncover the fact that there is far more to forgiveness than either forgetting or vicarious punishment.

When we begin to look at the cross in terms of the real-life situation, an almost new world for some people will open up. We might take a move past the traditional and religious expression of the Atonement to a rather wider, all-embracing view. It does not require anything more than a thoughtful reading of the Gospels to see how our Lord was painfully aware of the nature of the challenge that He put in front of his antagonists. Jesus was not being belligerent about it; He was simply being honest. In doing so, however, he presented a total threat to the power and control of both religious and political leaders. In line with Isaiah’s expectation of the Suffering Servant, and His refusal to follow or express common Messianic expectations, Jesus pointed, in word and deed, to the leadership pattern of the servant. Ephed Jahweh; the Servant of the Lord. This was not in order to be nice, but to be relevant. As someone rather later in history than Jesus has said: power corrupts and absolute power corrupts absolutely. It does not take much to see how recent world history has multitudes of illustrations of that!

Why though did Jesus submit to the cross, when He must have known that his enemies would see such an attitude as the expression of utter weakness? And remember that He turned His back on the ‘offer’ of twelve legions of angels. Have you ever wondered why?

We humans tend to operate on the assumption that the most powerful person or response is the right one. While we know that to be untrue when someone stronger opposes us, we still tend to think that we still need to overcome their strength. Power, do you see? And when does power really work, when does control do anything other than diminish the other person or people?

Come back with me to the Story of the Fall, and ponder perhaps more closely the old and familiar words. ‘You shall be like gods’ was the nub of the temptation.’ (My notes on Genesis offer rather more complete explanation than this – and may be worth following up.) In other words, the Biblical view of sin can be expressed as the assumption of the person (or people) the power of the Divinity. Then I can demand that you do as I tell you, without appeal from you. Power, control, demand, all make the assumption that mere male me can do anything that I like. And as Genesis 3 points out oh! So terribly clearly, that once I follow such a path, the first casualty is the truth, the second is my relationship with you, and alongside all that is the breakdown of any relationship I may have had with God. They discovered that they were naked, and made themselves fig leaves ...... hiding their real selves from God, the other person and even from themselves. Those ancient Jewish writers were absolutely remarkable in their capacity to tell such powerful stories.

In other words, the entire human dilemma has to do with breakdown of relationships, individual, corporate, national, and these days international. The Biblical assessment of the cause of the breakdown is illustrated there in Genes 3 and in the rest of Scripture. The whole of the Biblical emphasis, from Genesis 3 on, is to find the means of restoration from that breakdown. Reconciliation. Repentance and forgiveness, restoration. How do we get there?

May I take a simply ordinary human situation to illustrate where I am trying to lead to? Imagine if you will that I somehow managed to inflict enormous hurt on you, and damaged you dreadfully. It matters not if that action was deliberate or accidental; the outcome is the same. If however, I later realized the extent to which I caused the damage to you, and looked for some means of apologizing, how could I go about it? I could not imagine that any direct approach to you, the hurt one, would get any further than a powerful rebuff. It would be necessary, seems to me, to try and engage the services of a third party, preferably one known and trusted by you.

The only method of approach to you remains the apology, which can be seem as me reaching out in reconciliation, but also being highly aware of the fact that my part of that bridge is very minor, compared to the extent to which you would need to reach. And I cannot imagine that mere apology would be enough anyhow. If there is one thing that you would have every right to demand, is that my approach be honest and totally so, I cannot undo what I had done; I can only accept responsibility for what I have done, and offer what can only be called repentance. (Repentance is not ‘being sorry;’ it is far more significant than that. Repentance (in Greek it is metanoia - metanoia -change of mind, literally, change of direction, a moving away from my old attitude and action.

However, if you – by any stray chance – were of a mind to restore the relationship, you would need to be fairly certain of my metanoia, and forgive. (To forgivenever means to forget! It means simply to put what is past behind you. To forgive actually means that you forego your right of retaliation. Forgiveness is not something you feel; it is something you determine to do. So that means you carry the double hurt, if you follow me. I hurt you in the first place, and you bear the double whammy by refusing your right to belt the living daylights out of me. This is why the symbol of our Faith is the Cross: we have a God Who carries the double hurt. We do not have a God Who is forever looking to belt the living daylights out of us. Read that again please. Now and only now can reconciliation occur, because you bear most of the cost of reaching this point.

However it is important to notice that I have to take responsibility for my initial action, as well as for any apology of mine being completely serious. I cannot go back and remove the act that I caused, and in a way am really unable to offer a waterproof promise that I will not re-offend. (It is important to re-read Philippians 2 to see how Paul expresses the Gospel in terms of Jesus’ refusal to ‘be like Adam,’ and then the challenge that the Gospel puts in front of us to live and act like Jesus,in contrast to Adam.)

Can you now see how remarkably Jesus and His life and death reflects exactly that same process. No belting the living daylights out of His oppressors, and even His preparedness to give those perpetrators the chance to reflect on their actions (after the Resurrection) and change their direction, repent, metanoio.

The real challenge of following Christ is that of so embracing this reconciliation that He offers us as to reflect His pattern in our relationships with others. Mind you, those others will need to see the need for repentance, meatanoia, change of direction and attitude, without which the process falls to the ground.

Email ThisBlogThis!Share to TwitterShare to FacebookShare to Pinterest
Labels: cross