Would Jesus Go to Church? 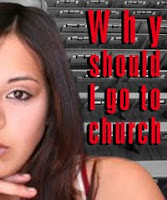 Once a month we hold an event at Holy Innocents named QT (Question Time). The event is exactly that: speakers, questions from the audience, great live music, wine from Belair Fine Wines, and delicious snacks from Foods From the Edge. Last night the question was whether God/Jesus/you/me/anybody would/should come to church? I was the speaker for the affirmative, and not just the affirmative, but that if Jesus were going to go to church (rather than synagogue) he would go to a traditional church. I made three broad points:

First, many people find church such a disappointment. We love to point the finger or regale a good conspiracy story about the church, the Vatican, bishops, priest, monks and nuns, or the generally hypocritical group of human beings known as church-going Christians. Well, I think the church is a disappointment. We are sinners. (See here for more on this point.)  But remember, Jesus quite liked sinners. When the church forgets it is a company of sinners, Jesus would disapprove. But sinners who seem to be getting it wrong and know it? He'd hang around with us.  What is the alternative anyway? Are those who say they don't come to church because the people who go to church aren't perfect saying that they would come if we were perfect? (Like them?) If you are one of those then I am glad we aren't perfect because you'd be a bigger pain in the arse than we are already.

My second point was that many people protest against the institutionalization of Jesus and his gospel in the church. When we separate out my first point above from this protest there isn't much left except a bit of contemporary institution-bashing. The truth is that without the institution there would be no memory of Jesus left after all this time. No means for the eyewitness accounts to be carried faithfully through the generations. It would have all been lost. A dangerous memory needs an institution. The problem is not the institution as such. The problem is when the institution prevents people from seeing the gospel. The mismatch between institution and gospel is the problem. (Although remember the point about failure I made above.) 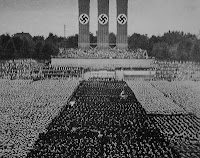 My third and final point picked up what I think is perhaps the most common complaint about church: church is boring. Indeed the local baptist church advertises with the catchy, "Do you find church boring?" The idea is that they aren't I think. Well, there are greater sins for a church than being boring. Superficiality is the greater danger, I think. Indeed, following James Alison, I think the liturgy has hit the mark when it feels a little anti-climactic. Alison contrasts what he styles 'Nuremberg' worship (Nuremberg was a preferred site of the Nazis for their mass rallies/liturgies) with 'un-Nuremberg' worship. Nuremberg worship, through building up a sense of victimization, righteous anger and the formal identification of the 'sinners' leads to the great climax of the appearance of the messiah who will save the people. Alison contrasts this with the climax of Christian worship (particularly traditional Eucharist) with the appearance of the true messiah who is 'just there', having already achieved all there is to achieve. No mass hysteria, no invitation to the congregation to feel victimised, rather the congregation knows itself to be forgiven by the victim. No need to whip the crowd into a frenzy. An anti-climax really. This fits nicely with the thesis of James K. A. Smith in his Desiring the Kingdom, where he points out that worship is all about reorienting our desire to God. The reorientation is for our benefit, redirecting our love away from the idols of our times. And worship that shifts our gaze from the shopping plaza, the AFL/Olympics/World Cup theatrics, internet games, etc., will necessarily appear boring. Otherwise it becomes the religious version of bread and circuses. Boring is good. Jesus would approve, and come to church because it is boring. It's meant to be. (At times at least.)
Posted by Warren Huffa