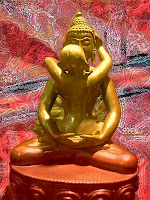 It is said that the dispute about the place of gays and lesbians in ordained ministry is about the authority of Scripture. I think not. The continuing break-up of the churches across the globe because of disputes about sexuality is more an example of using Scripture against itself by perpetuating the victim mechanism. The disputes also attest to the power of desire and sex. At stake in the debate are our beliefs about the transcendent and the material, and their union (or separation), and the relationship between desire for the material and its interlacing with desire for the transcendent (and vice-versa). As  Peter Leithart says (see below), "Doesn’t sex itself hint at a meaning different from the sexual meaning?" Perhaps we might say "in addition to the sexual meaning", although this also is inadequate because it suggests that the extra meaning is permanently separable from the sexual meaning itself. The transcendent meaning should not be collapsed back into the sexual meaning, but neither should sexual and transcendent meaning be separated. We could quote Chalcedon's description of Christ ("without confusion or separation ...") and apply it to the union of physical and transcendent sexual meaning in each human person and lover.

Peter Leithart has been discussing the Song of Songs and has touched on a number of relevant issues. This post is good on the transcendence of sex. Here is an extract.


"What assumptions about sex are behind the common opinion that the Song (of Songs) is only an erotic poem, only a celebration of human sexuality and marriage, full stop?  (Tremper Longman: “There is absolutely nothing in the Song of Songs itself that hints of a meaning different from the sexual meaning.”)  When commentators express such opinions, are they already implicitly assuming a materialist view of sexuality?  Are they coming to the text with a presupposition that sex has no inherent transcendent meaning?  To put it the other way round: Doesn’t sex itself hint at a meaning different from the sexual meaning?"

We are complex, multi-layered beings, and the whole-hearted embrace of our physicality is a joyous and fearsome thing, for carried out faithfully it leads to encounter with the resurrected Christ. And that takes us way beyond ordinary religion's use of the resurrection to merely talk about an individual's personal existence after death.
Posted by Warren Huffa