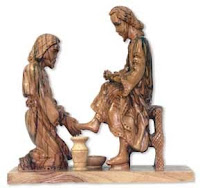 We read from Luke 14:1-14 on Sunday. 14:7-11 is not quintessential Jesus. He has taken a piece of sensible, common wisdom available in Proverbs 25:6-7. Show a little modesty is the piece of advice, and Jesus makes a more theological point, perhaps that our self-promotion will not trick God (true, and while not below Jesus to say, it just sounds a bit too safe for him), or more likely a blanket warning about success in the world. "For all who exalt themselves will be humbled, and those who humble themselves will be exalted." (14:11) That is, the kingdom will bring down thrones and raise up the lowly (Lk 1:51-53; 6:20-26; 16:19-31; 18:9-14) There is a rawness about this saying that we want to blunt, even a little. It seems a little extreme and unfocused, to say the least. This kind of blanket assertion is found elsewhere, and early. (Jas 4:4-10; 1Pet 5:5b-6) Why didn't Jesus just go with the more reasonable, 'You can't fool God by self-promotion? Why tack on the pithy, difficult, blanket epithet?

Before answering that question, let's return to the passage in hand. The parable advising against premature self-promotion is followed by a passage quintessentially Jesus. Invite to your party those who can't repay you, or who no one else would even think of inviting! The excluded, reviled and ignored. Those who occupy a humble place in the world without choice, no matter how inflated their ego. Why?  So that we can find a home in the kingdom, because the kingdom is populated with such as these. This is more than Jesus giving us some advice to show compassion or humility. This is about the way our humanity and the world is structured. We divide, exclude, victimise and persecute. It is built into our structure of being, and the way our societies are structured. Jesus invites us to live differently by seeing the world differently. Not from the point of view of those who 'win' or want to 'win' in such a world, but from the point of view of those who 'lose'.The honoured guest, from the point of view of the kingdom,  is not famous or wealthy.

Which brings us to the beginning of today's reading, Lk 14: 1-6, the man with dropsy (edema). He is the honoured guest, and it is only Jesus who recognises him and acts. That's because Jesus chooses to see the world from the perspective of the humility of the cross. (Phil 2:5-11) The Pharisees, and a reader like me, very easily miss the point.

Returning to the question of why Jesus would make such a blanket statement as "For all who exalt themselves will be humbled, and those who humble themselves will be exalted." (14:11), it is important to see that Jesus doesn't thinks the kingdom is about moderating the excesses of human behaviour. There is something radically wrong, cutting to the heart of our societies and the way we become who we are as members of this society. We are all implicated, and there is no escape through moderation or some kind of self-realisation that relies on one's own resources. The doctrinal name for this is Original Sin, and I will write a little more about it later in the week.
Posted by Warren Huffa