The Parable of the Dishonest Manager (Luke 16:1-9) 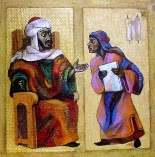 Like me, have you always wondered about this parable? Why praise a dishonest manager? "Well done for being so dishonestly devious." But what if vs 9 were a Lucan addition? It is vs 9 that skews the interpretation of the parable itself. Without vs 9 the praise of the master becomes explicable, and the parable takes its place as part of the battery of parables he uttered in reference to his ministry of forgiving sins.

The key, I think, is not to let vs 9 make us think that the manager continues to act dishonestly when he writes down the debts owed to his master. He has previously been accused of acting dishonestly. (16:1)  However, maybe in a society of honour, writing down the debts of some of his master's debtors (16:5-7) would bring immense kudos to the master. The master would be seen generally as a generous man, and might even get the best seat in the synagogue! (See Matt 6:2) Those whose debts were remitted aren't aware that the manager is acting without the consent of his master. They think they are receiving the master's generosity. When the master finds out what the manager has done he praises the formerly dishonest manager because he has finally done something worthy of praise!


Isn't this exactly what Jesus did? He remitted the debts of sinners in the name of God. And those forgiven would have spoken highly of the generosity of God. No doubt this compounded the anger and fury of the enemies of Jesus. However, when seen in this light, the parable makes sense and can plausibly be seen as part of the battery of parables Jesus told about forgiveness. (E.g. Luke 15; 18:9-14)
Posted by Warren Huffa

Email ThisBlogThis!Share to TwitterShare to FacebookShare to Pinterest
Labels: Forgiveness of sins, Gospel of Luke, sermons