Here is a tough parable from Jesus. Some doubt it was even spoken by Jesus, but it has that hard edge that sounds like him. However, perhaps those who say that Jesus used an original common story and made his own changes might be right. The use of 'Hades' owes more to Greek mythology; Jesus prefers Gehenna (Matt 5:22; 10:28; Lk 12:5), the pit of refuse perpetually burning outside of Jerusalem in the time of Jesus. Interestingly, in OT times is was the valley where Israel joined itself to the ordinary religions around it and practiced child sacrifice.(2Kings 23:10; Jer 7:31) If Jesus has taken an original story and made changes, then we should be careful not to read too much into the imagery of the 'bosom of Abraham' and 'Hades' as exactly replicating Jesus understanding of the structure of the afterlife. Rather, the our focus might be better directed at the strange inversion of expectations in the plot of the story.

A couple of points to think about:

1. The parable seems to run contrary to all manner of prosperity gospels. The prosperity gospel links earthly fortune to God's favour, which will continue into 'heaven'. In its crassest form the prosperity referred to is wealth, but it can just as easily be converted into moral rectitude, spiritual gifts or faith, etc. My faith is evidence of my salvation in the future, especially if that faith includes healings and other extraordinary experiences! But the parable warns us that earthly circumstances are not a reliable indication of our relationship with God, now or in the future.

2. The prosperity gospel is just one more example of ordinary religion. Ordinary religion (as distinct from from Christian faith), despite any rhetoric to the contrary, bases itself on 'you get what you deserve'. In ordinary religion mercy is absent. Interestingly, in the parable the rich man, who showed no mercy during his life, and perhaps in the original story went to heaven (he deserved it just as he deserved his wealth), cannot be helped by an act of mercy.(16:24) His brothers can save themselves from a similar eternal fate if they repent, that is, seek mercy. (16:30)

3. The problem for the rich man is that he misread what is required of him. His earthly comfort was not an indicator that he was being blessed by God! In his smug trust in his own prosperity he sees no need to seek mercy! So, after death he lives out the god he believed in, the god without mercy, where the scales are weighed and the result permanent. The rich man was found wanting. Perhaps we should prefer the God of mercy! 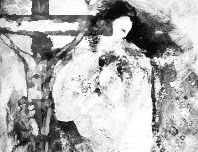 The parable remains a shocking warning to beware ordinary religion and its prosperity gospel, and jumping from our 'prosperity' to eternal salvation. If we want a 'you get what you deserve' approach from God, then we may well get it. And we might find that we haven't earned what we wanted!!
Posted by Warren Huffa