Tony Kelly, in his book, Touching on the Infinite, quotes from a poem by Tomas Transtromer: 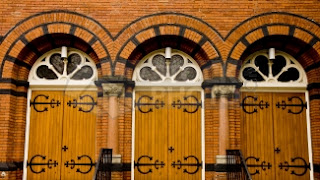 "Each man (sic) is a half-open door leading to a room for everyone."


So for a kid's talk I used a couple of old louvre doors from a cupboard. I had a couple of  kids be the hinges so  could open and shut the doors. I had the kids knock, I opened and hey, look, there is the congregation. And the other way around so I opened to the altar. The point was to say people are like doors. Whenever we meet someoneit is sort of like opening a door because there are a lot of people behind them in a big room, including parents, friends, church, school, and others. And Jesus is like that; open him up and hey, look, (using traditional language) there is the Father! (A future kid's talk could push this a bit further with the doors. Jesus is the door to the Father, but unlike doors leading into a room, we take Jesus the door with us. We can't ever discard the door. It will be so strange they will get the point, as will the adults listening. )

The door imagery was a good one to use to talk about the Trinity with the congregation. People seemed to get it. I contrasted the understanding of our humanity as a door with the individualistic 'self-made man'. The human being of the latter is self-contained, leads nowhere, and relationships are either occasionally needed, recreational but never constitutive. (cf. the Arian view that God was not eternally Father with an individualism of sorts at the root of God.)  The door image leads nicely into what it might mean to be a church of a communion rather than a single congregation, and as disciples we are doors to ... well, Jesus, God, church.
Posted by Warren Huffa