Blame It On Darwin? 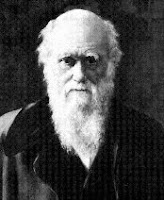 It has been an interesting time recently. The big anniversary mention of Charles Darwin and his ‘Origin of Species’ seems to have brought out the worst in some parts of the Church. I was passing a local Baptist Church recently to find a banner about coming sermons, presenting that congregations’s view that evolution is man’s attempt to avoid responsibility ... and God. Perhaps my views on the work of that naturalist of the past is somewhat jaundiced – he married into a somewhat distant line of the Keynes family, would you believe. He married a niece of John Maynard Keynes – (who also demands further attention in these fiscally challenging times)

Most sad of all is the way in which Darwin’s search for truth in his area of discipline had turned into a huge dispute between science and religion. I doubt if the man ever considered that possibility, for I understand that the one-time candidate for Orders continued his support for the (Anglican) South American Missionary Society till his death and did not expect the horrific response from many! Be that as it may, the real issue of his thoughts and theories has tended, in many circles, to become a matter of huge conflict.

One thing that has long struck me in the debate that has gone on far longer than my lifetime is that surely there is no conflict in the two disciplines of life, science and religion. Both, surely, are searches for truth, and what’s more, searches for bases for truth. Evidence, if you like. Both are essential elements to human development, although the latter tends to come in for considerable flak – mostly because (pardon me!) religionists tend to go in for untenable arguments and grounds, particularly if some sacred cows appear to be in danger. Truth is the issue, and always must be, whatever the outcome.

I recall every now and then the experience of a co-theological student of 50 years ago, who refused to attend lectures on the Creation Stories of Genesis because the lecturer refused to bow to that young man’s refusal to understand Scripture biblically. He vowed to remain literal and fundamental, which meant he must still be trying to defend an impossible chronology. In spite of Archbishop Ussher, the world was not finally created on 23rd October, 4004BC.

If you can cope with another story, I recall 35 years or so ago, having been asked by my Bishop to go to Coober Pedy to sort out a pastoral problem. The RFDS was happy to agree to me flying with them so that meant a series of days flying with a not too happy pilot, unsure of the value of having this ‘skypilot’ alongside of him. Suffice to say that the experience became a valuable one. After landing at Cook (SA) on the Transline, Jack, said pilot, told me he thought that we Christians were stupid. I agreed at the possibility of such a charge, and asked about what, precisely, Jack had come to that conclusion. He referred to the matter of the last paragraph, and while I agreed that there remain quite some Christians who still held to that view, also informed him that I understood that Jews, whose Genesis we were talking about, never understood it literally. I went on to explain more fully, and Jack smiled and interrupted. “You’re right, you know!” he expostulated. My response was simply, ‘and how the hell would you know?’ It was his turn to chuckle. “I am a Jew!” he said. It has long been a sadness of mine that from earliest times, it seems that Jews and Christians could never talk together long enough for us to avoid falling into so many understanding (or misunderstanding!) traps of our own making.

Those Genesis tales are far from shaken by Darwin’s theories – but a literal approach to them has long been. What one needs to do is to understand those ancients tales, catch sight of what they are conveying, and see that these is wisdom beyond imaginings in those apparently naive stories. Jews were never interested in what we call ‘science’ – which only comes from a Latin word for ‘knowledge’ after all. Science looks at the ‘how’ of life and this universe, whilst those wise old Jews looked for the ‘why!’

From where I sit, there is no conflict between the two disciplines. But both need to be taken into consideration. Neither offer any escape from reality; both demand that reality be faced. Both require solid hard evidence for their decisions, and in both cases, that may require the presentation of a theory that is then tested and checked ...and possibly even modified.

Neither time nor space permits the expansion here of the outcomes of where this leads. But it will never hurt for Christians to follow the pattern of Old Testament Hebrew understanding of the Creator – which emerged, not from dogma and tenet, but by the simple and powerful business of observing life and relationships and understanding the outcomes. And that was over a very long period of time indeed.
Posted by Warren Huffa