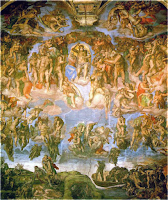 We are rightly suspicious of black and white judgmentalism. This is one of the features of the Book of Revelation that is a bit hard to take. But let's not be too hasty. People who end up at the upper extreme of the black index don't begin there. They start way back somewhere else on the continuum. And they steadily head that way over time. Sin (or virtue) is, after all a habit, and we make ourselves into the people we are through our habits. The black and white of apocalyptic is, at the very least, warning us about the decisions we make today. (Again, part of the helpful urgency embedded in the apocalyptic form.) Do this (or not do it), and the same the next time, and so on, and who will you become? The extremes of human failure often depicted in apocalyptic might appear to be a long way from where we think we stand but, according to apocalyptic, perhaps not so improbable as we would like tothink.
Posted by Warren Huffa