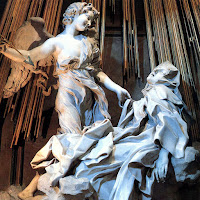 Last week I quoted from Diana L. Hayes. it was a good quote (see here), quoting in turn, and in approval, St Augustine about our need for God. In the same small article - written like a manifesto for a new spirituality - she says that churches, synagogues and any of the other traditional forms of institutional religion are not answering the deepest yearnings of people anymore. "Perhaps this is so because these institutions have become so involved in naming and thereby controlling the Spirit that they no longer have it within their midst... They have lost that which they sought and claimed to own and have become 'whitened sepulchers' devoid of life, of knowledge, of hope, of the spirit." (p. 54)  Seems a bit extreme, but it is written as rhetoric, so a bit of exaggeration is mandatory. Would the traditional religion she mentions be like that practiced by St Augustine himself? Presumably. Yes, of course, churches and church people can think that God is theirs, thereby making God into an idol. It is a common human failing, even when the god owned is the more common idol of wealth, power, family, longevity, security, etc. And I think it was Jesus who used the" whitened sepulchers bit", and he was most definitely traditional. (Unless, of course, you think nothing good can come from Israel, and therefore agree with the "Jesus went to India ..." antisemitism.) It seems quite a common practice for contemporary 'spirituality' to take from traditional religion its great insights and truths, cut the truths away from all the practices, beliefs and history that produced those truths, and then claim that, somehow, you know the truth better and can get there from some other route. Call me a skeptic, but it just doesn't hold water. Bonhoeffer, with his hint about a religionless Christianity, is used in a similar way. But Bonhoeffer was traditional. And the great figures who stood for justice and peace, favourites of the non-traditional movements, were traditional Christians. Think of Romero, or Dorothy Day. And then there is the deep spirituality of the mystics like Teresa of Avila, John of the Cross, and Brother Laurence, not to mention Francis of Assisi, and so many others that are beloved of new age religion, but flap around like fish out of water in it. The traditional faith and its traditional practices produced the mentioned greats. A strict, traditional sacramental and prayer life, with traditional ethics, theology and Scripture reading grounded the great mystics. Yes, the traditional church fails to be anywhere near perfect, but it has always thrown up the greats like Augustine and Teresa, as well as the ordinary, traditional Christians who do so much good in the world despite their failings, and who will always, it seems, be a disappointment to the new age.
Diana L. Hayes, "Who do You, God, Say That We Are?", in Mary Hembrow Snyder, ed. Spiritual Questions for the Twenty First Century, pp. 53-56.
Posted by Warren Huffa