I'm interested in the way Benedict XVI is pilloried in general, and what a more nuanced view might include. Try this from Tracey Rowland, 'The Triumph of Theologians Over Bureaucrats in the Vatican', from the ABC Religion and Ethics portal. Here are a few quotes:

"The Church is currently faced with the problem that the generation of 1968 is now at the height of its social influence and is busy pushing a militantly secularist ideology. In order to contend with this we need ecclesial leaders who are able to intellectually engage with the ideas of this generation. They can't do this unless they are across the intellectual history of the past couple of centuries, including the Nietzschean claim that Christianity destroyed eros and is a crime against life itself."

"One of the hallmarks of his (Benedict's) interventions in this field (dialogue) is his insistence that truth matters and thus that the idea of making praxis take priority over belief (cf. Kueng's Weltethos or "Global Ethics" project) is a flawed approach. This is a position he takes from his early mentor Romano Guardini. It is also the position taken by Professor John Milbank, friend of Rowan Williams and leader of the Radical Orthodoxy circle of scholars in the UK and by Professor Gavin D'Costa, an advisor to the Pontifical Council for Inter-religious Dialogue and author of several best-selling works on the subject of dialogue." 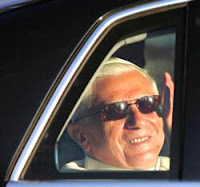 "John Milbank argues that the emphasis on justice and liberation one finds in the "praxis solution" glosses over the fact that religions have differed as much over political and social practices as they have over notions of divinity. He also draws attention to the paradox that those who are most vocal about the need for religious pluralism and building a new world order based upon shared ethical practices tend to be basing their stance on Enlightenment values and attitudes, that is, Western liberal values and attitudes, which run counter to their very project of affirming the non-Western 'others'."

"Let's hope that Pope Benedict continues to appoint to high office people who care about ideas and their social effects, rather than deferring to self-regarding pragmatists and professional paper-shuffling schmoozers. Given he spent 25 years working in the Curia he is well placed to know who fits into what category."