The Dark Green God of Christianity 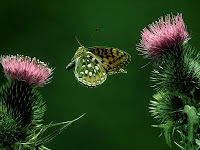 We had an interesting QT (Question Time) at Holy Innocents last Sunday night. Three excellent presenters with some good questions and discussion following. The topic was "Is God a Greenie?" The answer for most people present (and I think for all three presenters) was 'Yes'. The question is what shade of green? I would say that God is dark green, passionately in love with all of God's creation, a creation interdependent in its complexity and evolution. Can Christianity be a dark green religion? Take the following definition of dark green religion:

"Dark green religion, as I have constructed the term, involves the perception that nature is sacred and has intrinsic value, the belief that everything is interconnected and mutually dependent, and a deep feeling of belonging to nature. Often rooted in an evolutionary understanding that all life shares a common ancestor, dark green religion generally leads to a form of kinship ethics that entails ethical responsibilities to all living things. From this stance, all life is, quite literally, related—a belief that leads naturally to empathy for other living things, who, like us, have evolved through what Darwin aptly called the struggle for existence. Such perceptions generally lead people to see more continuities than differences between their own and other species, and this perception generally leads to humility about one’s place in the grand scheme of things." (Bron Taylor, "Civil Earth Religion Versus Religious Nationalism", http://blogs.ssrc.org/tif/2010/07/30/civil-earth-religion/, accessed 16 August, 2010.)

On this definition the answer is definitely yes. In fact the author goes on to say that the new sensitivity to nature and the cosmos and all living things, with a concomitant sense of kinship and interconnectedness is being grafted onto existing religions, but that such grafting is not necessary because dark green religion can stand on its own feet. But can it? Once we start digging a little deeper theologically we start asking questions about how God and the interconnected web of living and non-living matter relate. This is where dark green religion will fall back into one of the pre-existing options of pantheism, monotheism, etc, rather than just be grafted onto one of them. Is God in some way different from us (that is, everything in the material universe), or are God and matter co-extensive? Christianity declines to collapse God into the universe, maintaining the difference between God and creation. Christianity does this so that the relationship between the two can be one of loving union. Undoubtedly dark green religion can be poured into a pantheistic religion, even one that appears new. (However, Taylor says that the dark green sensitivity is mostly going in a secular rather than religious direction.) But that isn't really new. Dark Greenies will choose either a secular path or find their place in one of the well worn theological paths of humanity.

Speaking of the dark green God of Christianity is not grafting something totally new onto a Christianity allegedly devoid of greenery. While the green sensitivities of our current age undoubtedly add much to our understanding, it has also helped us recover the green and green friendly core of Christianity. (For example, the hypostatic union of  human and divine in Jesus and, of course, the resurrection of Jesus. Not to mention the sacramental practice of the church and an absolute ton of the Bible.)
Posted by Warren Huffa