Conversion, Mercy and The Unforgiving Servant

A popular misconception of conversion and the Christian life, both within the ranks of the church and beyond, is equating conversion with an apparent change from an extreme of self-degradation or violence to a new life opposite to the old. When I was a teenager this was a standard Christian presentation in the public high school I attended. The presenter would tell us about their former life of meaningless violence and drug taking contrasted with the change that came through faith. The heart of Christian conversion was presented in the story. Conversion is a radical change that breaks our former self to bring alive a new person. We are called to glory, and there is no room at the inn for the current distortion of our humanity. We need remaking. 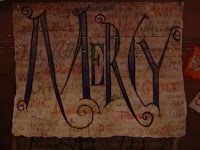 It is tempting for the voice of faith to use a Damascus Road type
example in talking about conversion because of its dramatic quality. It makes a good story. Moreover, the person who has had an overwhelming conversion experience from a former life of dramatic darkness often wishes to share their experience while it is alive and vivid, and before it is taken up into their continuing journey of life-long, and at times patient, change. The drama of their own conversion translates into an urgency for all listeners to hear the gospel. It can be very powerful, despite the obvious ways in which it can be used to manipulate the vulnerable. However, this kind of focus on black-to-white conversion can unwittingly inoculate the listener against faith and conversion. 'But I am not like that!' is the refrain. I felt this as a teenager. There is a little of the Pharisee in Jesus' parable of the Pharisee and the Tax Collector in this attitude. But more importantly, while this kind of black-to-white conversion story does reflect the heart of conversion (i.e. a radical remaking) it does not reflect where and how most of the work of conversion is undertaken.  The heart of the Christian life is conversion, but the location of the dying and rising of conversion is in the living of it over a long period of time, taking in many changes, dead-ends as well as joys and victories. Conversion is a patient action of a patient God. The focus on an overnight change misses the learning and conversion that must take place for all of us regardless of whether we have a Damascus Road experience. Conversion into a Christian life includes the loss of innocence that comes after the first flush of repentance and conversion, and includes the transformation of the self-righteousness that can follow a major conversion experience. That is, the problem for some who focus on their own or the general need for an overnight conversion is the reticence to grasp fully the need to give up the sense of righteousness that follows it before it becomes an entrenched self-righteousness. It is too easy for the converted  to end up persecutors.

The rejoinder I have heard is the story of St Paul's conversion. He changed from black to white virtually overnight. And it was this that remained the heart of his faith and proclamation for the rest of his life. Certainly, his conversion was central and unforgettable. However, he went to 'Arabia' (Sinai or Syria?) and then went and joined a church for three years after his conversion. There was more to do than just fall off his horse! And if I am reading him correctly, the focus in his theological and pastoral use of his Damascus Road experience is the mercy of God shown to him (as well as the independence of his Christophany from the Jerusalem leadership).

James Alison says that a better way of thinking of conversion is not to focus on the change from black to white, but on the experience and effects of receiving mercy . The converted are merciful. Here is what he says:


By a story of conversion I don't mean one of those accounts of how I was bound by this or that vice, had an overpowering experience, and have now managed to leave it all behind me - though such changes are by no means to be belittled when they happen. However, they are incidents, and not stories. Someone can give up doing something held a vice only to turn into a persecutor of those who lack his same moral fibre. That is not a Christian conversion. The authentic convert always writes a story of his or her discovery of mercy, which means that they learn to create mercy, and not despite, for others. This rule of grammar we find set out in the parable of the servant who was let off all he owed by the King his creditor, but who didn't forgive the tiny debt his colleague had with him. (James Alison)

Email ThisBlogThis!Share to TwitterShare to FacebookShare to Pinterest
Labels: Forgiveness of sins, Gospel of Matthew